Imagination released a new GPU IP and appointed Simon as its new CEO.

Imagination Technologies announced the launch of the new IMG B series GPU IP. This is its first GPU IP series with a new multi-core architecture, which can provide the highest performance per unit area, with peak computing power up to 6 TFLOPS and AI computing power up to 24 TOPS. Its automotive GPUs have met the requirements of ISO 26262 safety standards. And supports automatic driving and assisted driving.

Compared with the previous generation of IMG A series products, the B series has reduced power consumption by 30% and reduced area by 25%. At the same time, the fill rate is 2.5 times higher than that of competing IP cores. It can also achieve lower power consumption for a given performance target. Consumption and bandwidth reduction of up to 35%. 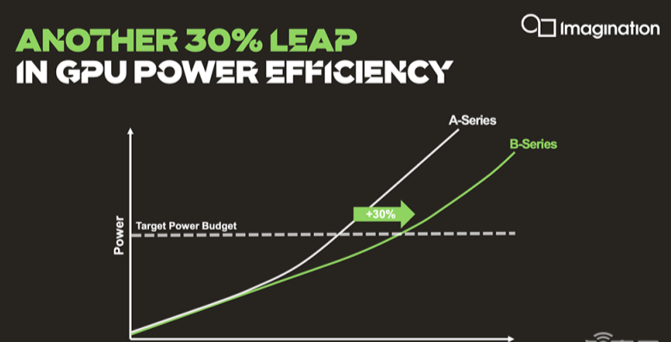 Imagination, which has gained fame due to mobile GPU, is expanding its business scope to a wider range. With the scalability of the core part, the IMG B series is not only suitable for traditional mobile devices, consumer devices, Internet of Things, microcontrollers, digital television (DTV), automotive and other markets, but also expands to desktop GPUs and cloud GPUs. Performance level.

At present, IMG B series can provide authorization, and each product series has been authorized by the manufacturer first. David Harold, chief marketing officer of Imagination Technologies, said that several customers are already approaching its desktop and cloud GPU products, and these projects will be announced next year.

Judging from the disclosed performance, this seems to be another big game that Imagination has made since it has been deeply involved in the GPU IP field for 25 years. In the context of constant Sino-US trade frictions, this British company relies on its own technical strength and is not restricted by the United States. The advantage of, is expected to stir up a more exciting battle in the field of graphics processing.

Imagination Technologies recently announced that Simon Beresford-Wylie (hereinafter referred to as Simon) will serve as the company's CEO. Speaking of the CEO of Imagination, the frequency of personnel changes in recent years has been quite high. In 2016, Dr. Hossein Yassaie became the CEO; in 2018, Dr. Li Liyou joined Imagination and became the company's CEO; in December of the same year, Ron Black took over as the CEO; in October 2020, Simon became the new CEO.

According to Imagination, Simon previously served as the CEO of Arqiva, a British communications and broadcasting service provider. Before joining Arqiva, he served as global executive consultant and executive vice president of Samsung Electronics' Network Business Unit. Beresford-Wylie was also the founding CEO of Nokia Siemens Networks, and a member of the Nokia Group Executive Board (2005-2009). In addition, he served as a member of the board of directors of the Vitec Group (2006-2013). During his five years as CEO of Arqiva, Simon has significantly improved the company's financial performance, employee engagement and customer satisfaction. After completing the sale of Arqiva's telecommunications division at a price of 2 billion pounds (equivalent to 17.6 billion yuan), he left his post in July 2020.

Regarding taking over as CEO of Imagination this time, Simon himself stated that Imagination is an important and exciting company with the best British and international talents. The existing team has implemented an ambitious strategy, which has achieved impressive revenue growth even in the current extremely severe business environment. With technologies that can change lives and industries, I am confident to ensure that Imagination and its partners continue to stay ahead.

In 2017, Kaiqiao Capital acquired imagination. Regarding the newly appointed CEO, Ray Bingham, Founding Partner and Executive Chairman of the Board of Imagination, said: “Simon is an admirable and energetic leader who brings his achievements in value creation. Outstanding achievements have joined Imagination. For the future development of Imagination, Simon hopes to use our leading AI and GPU technology to occupy a favorable position in the rapidly changing global competitive landscape."