Zuhause > Branchennews > A lot of us companies "layoffs" coming!

A lot of us companies "layoffs" coming!

In the past week, U.S. companies including general electric, Uber and Airbnb have said they will lay off thousands of workers, according to the Wall Street journal. 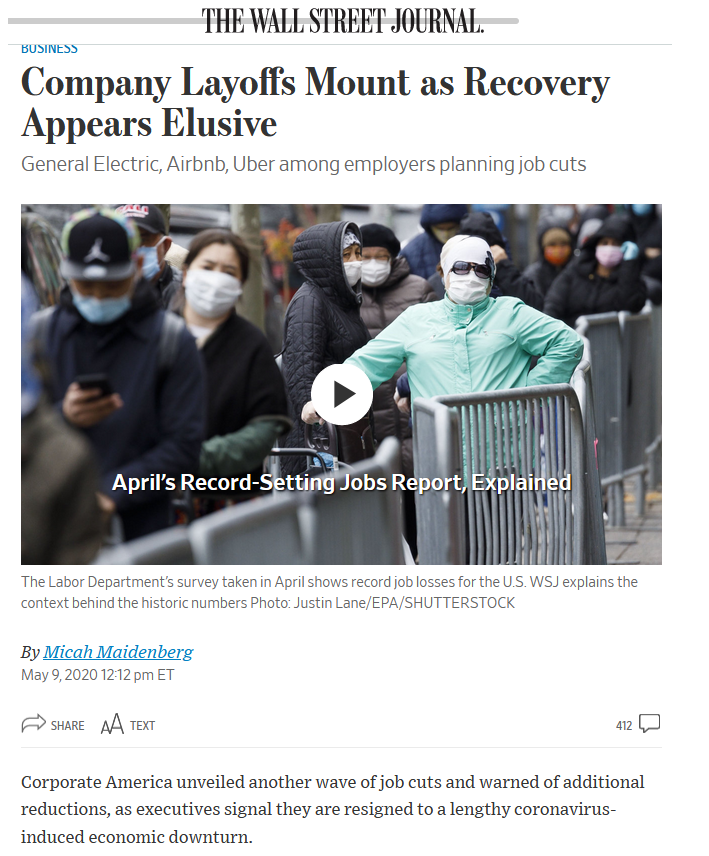 Meanwhile, MGM Resorts International is warning that some of the 63,000 workers it laid off could be permanently laid off starting in August.Also in the past week, aviation supplier Raytheon, the job site Glassdoor and United Airlines have said they are planning or have begun layoffs.

The "wave of layoffs" is upon us companies

United airlines is laying off 30 percent of its employees

Last week, United Airlines announced plans to cut more than 3,400 management and administrative jobs.Thirty percent of united's management and administrative staff were brutally eliminated.Kate Gebo, executive vice President of human resources, wrote in a memo: "we have to recognize that if we don't act decisively and forcefully, the company will face serious consequences.Even when decisions are made against our wishes and expectations."The redundancies will be notified in July.Staff will be asked to take 20 days of unpaid leave between May 16 and September 30 before being dismissed.

Before that, united had cut the hours of its 15,000 employees, who have since been transferred to part-time work, and about 20,000 employees have left the airline.

Last Monday, general electric cut as many as 13, 000 jobs in its jet engine business.GE Aviation is understood to have announced plans to accelerate cost-cutting by permanently cutting 25 per cent of its global workforce this year through staff cuts and voluntary action.That includes a previously announced plan to cut 10 percent of general aviation's U.S. operations.

"We are facing a lot of headwinds in aviation, probably for some time.We hope not, but that's not the reality we face."In late April, general electric co. (ge) CEO Larry Culp noted a 14 percent drop in orders from its aero-jet division, which makes engines for Boeing Co. and airbus co., reflecting the novel coronavirus that has hit some of ge's strongest businesses.

Raytheon: the factory is closed

Other companies in the aviation sector are also feeling the effects of historically low demand for air travel due to the outbreak.Raytheon, the aviation supplier, also announced plans last week to cut spending by $2bn.

"We laid off a lot of people in our offices and across the business sector.I think we're going to cut more jobs."Raytheon chief executive Greg Hayes said on Thursday that workers at the plant had all taken leave and were preparing to furlough office and business employees.Hayes said Raytheon is trying to keep as many jobs as it can and does not want layoffs to leave it without the right talent when the economy recovers.The layoffs are part of Raytheon's $2 billion "immediate" cost-cutting plan, and the company is trying to move some of its commercial staff to Raytheon's military units.

Raytheon's commercial operations include pratt & Whitney, a connecticut-based aircraft engine maker, and Collins, an aerospace supplier based in charlotte.The companies were previously owned by united technologies, which merged with Raytheon on April 3 to become Raytheon technologies

Christian Sutherland Wong, chief executive of Glassdoor, which publishes job postings and company ratings, said in a staff memo on Thursday: "as employers have substantially reduced hiring overall, it is unclear when it will resume.So there are plans to cut 30 per cent of the workforce, or about 300 people."

MHK (Mohawk Industries), a leader in carpet tile flooring in the us, is also laying off workers and on a temporary basis because of plummeting demand, executives said last Tuesday."The novel coronavirus pandemic has changed our short-term strategy as we adapt to a rapidly changing situation," said Jeffrey Lorberbaum, chief executive officer of MHK.

Nordstrom, the upmarket department store chain, is also cutting staff amid a flurry of announcements from executives at other us companies.Last Tuesday, Nordstrom said it was closing 16 stores permanently to deal with the impact of the outbreak.Chief executive officer Erik Nordstrom said the decision to close the store was partly driven by a desire to better focus on meeting consumers' expectations about digital shopping.

On April 30, foreign media reported that Juul was planning to lay off a third of its workforce, possibly as much as 40 percent, due to tough e-cigarette regulations and declining market share, with a final decision expected in the coming weeks.

About 800 to 950 people will be affected as part of a massive restructuring of Juul Labs."As part of our ongoing restructuring plan, we are continually reviewing our operations and the best way to position the company for the long term," the company said in a statement.

Some analysts believe that given the current situation in the United States is still not under effective control, if the follow-up is still not improved, the possibility of the next round of "layoffs" in the future is not ruled out.