On the evening of April 15, Toshiba group decided to temporarily close all its divisions and facilities in Japan, Fuji TV reported.As of 22:00 on April 15, 539 new cases were confirmed in Japan, bringing the total number of confirmed cases to 8,570, according to data from the ministry of health, Labour and welfare and local governments.The number of deaths increased by 16 to 178. 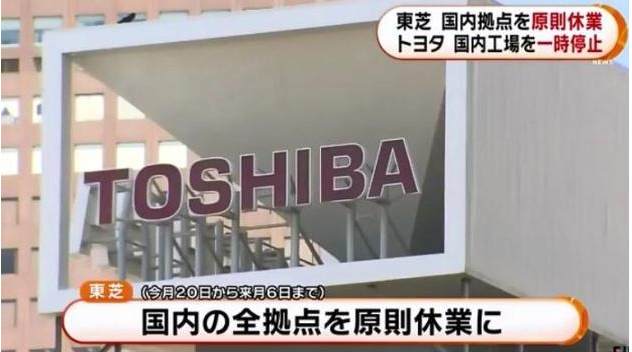 According to people familiar with the matter, Toshiba decided to shut down all of its divisions and facilities in Japan, including its headquarters and some of its factories, during the period from April 20 to May 6.It is important to note that, in addition to its businesses related to social infrastructure projects, such as power plants, about 76,000 employees will start "going on leave".Japan's kyodo news agency also reported the news.

It should be noted that since Toshiba sold its Toshiba Memory business to the japan-u.s. -south Korea alliance led by bain capital of the United States in June 2018, Toshiba continues to hold nearly 40 percent of Kioxia and remains the largest shareholder.Since Toshiba memory was officially renamed KIOXIA in October 2019, the total shutdown of Toshiba in Japan may have nothing to do with KIOXIA, and the related memory supply may not be affected by the shutdown

Toshiba and KIOXIA have not commented on the matter, but the group confirmed earlier that Toshiba and armor are not the same company

NAND, a maker of memorycontrol chips, said Toshiba and KIOXIA, two separate companies, were involved, according to Taiwanese media

Toshiba Memory Corporation, the company's shareholder and former NAND Flash supplier;TMC has changed its name to KIOXIA since last October. The shuttered Toshiba factory in Japan is a different company from KIOXIA

At present, KIOXIA's factory operation and production are all normal, without affecting the supply of NAND Flash among the group, and the company's NAND Flash suppliers are from a wide range of sources, including Japan, the United States, South Korea and mainland China, and the supply of global customers without any concern.